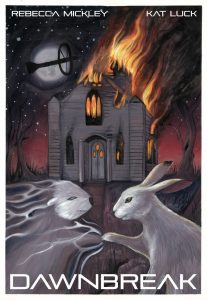 Mankind has finally made first contact with an alien race, but it was unlike anything anyone expected. With the newly acquired technologies to go almost anywhere and become almost anything, mankind may be facing the dawn of a new age or the beginning of the end for humanity itself.

Joyce and John were both born feeling different, like they were meant to be something else, a feeling they’ve never been able to share except to each other. With the alien “Path of the Other”, they could become anything, and suddenly there is hope even if other people don’t understand. Joyce can’t wait to be one of the first human-animal hybrids, Morphics, no matter what society thinks. John is supportive but worried about the risks and the stigma. Neither has any idea their choices are in the center of a brewing storm that will decide the fate of all mankind.

Not everyone thinks the Mendians and their technologies are as benevolent as they seem, and the new Earth First movement fears those corrupted by The Path the most. They will stop at nothing and go through anyone to see the first treaty with an alien race ripped to shreds. Even if it could start a war humanity can’t win.

Now Available at Amazon for Kindle