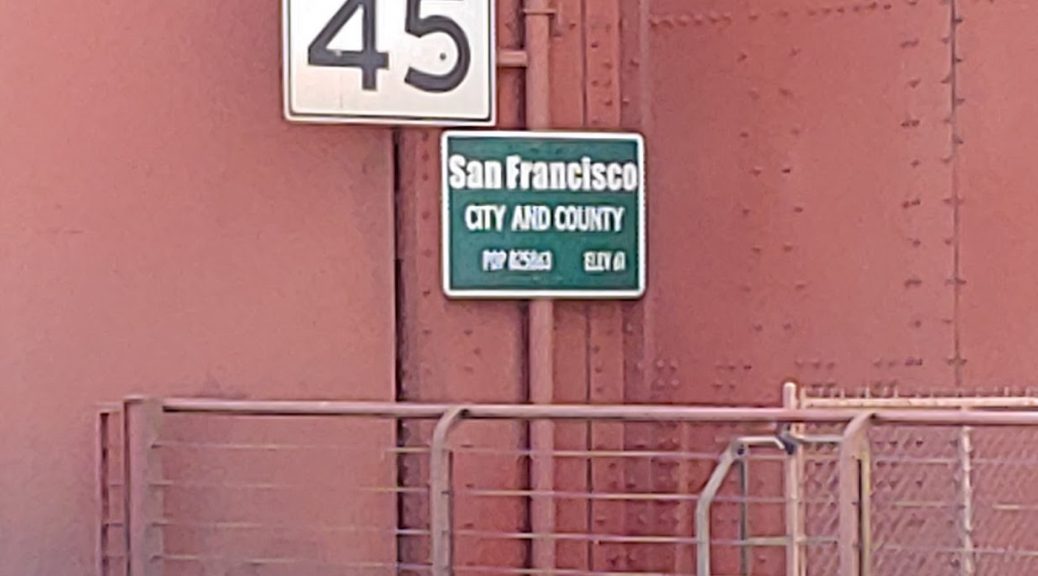 San Francisco, the city by the bay. This sprawling metropolis is purported to have it all, fine dining, upscale hotels, one of a kind experiences, history, and tourist traps aplenty.

But what about hiking? Can you even hike through an urban landscape, and find something that’s challenging, enjoyable, and memorable?

That was the question rattling around in my mind as I descended upon Oakland last week, wondering how I was going to get a Wandering Hops in, while I visited with my family here.

For most of the week, I’d be relegated to Mass Transit. Without a vehicle, my options narrowed as to where I could go, if not as a matter of access, then the time it might take to go anywhere. Even the local gym franchise proved to be a forty five minute bus ride away.

To be certain, anything not within walking distance was going to prove a logistical challenge.

Starting my research the evening of my arrival, I found many offerings at the periphery. Oakland’s Redwood Park, and Marrin both boasted hikes that looked challenging and interesting, but were also far afield, with transit times one way peaking towards the two hour mark, which would reduce my options.

Everything had to be planned around a transit schedule, but out of this challenge, I got an idea. What if I turned this on its head? Was it possible to find a hike in San Francisco proper that would offer distance, challenge, and beautiful scenery, all while proving easy to get to, right off the Bay Area Rapid Transit System (The BART).

Starting off from Golden Gate Park, I ventured north, determined to get as much of the road walking portion of the hike out of the way, only to be pleasantly surprised when I found a wide green space welcoming me, framed in by trees, providing a forested, and direct path for me to follow as I ventured towards Presidio Park.

The experience proved interesting. The roar of traffic was present on either side of me, but otherwise I was alone, moving through what felt like a forest only to pop out every block or so, and have to cross at a crosswalk to avoid being flattened. It punctuated the hike with a strange staccato, and well illustrated the nature of this hike as a mixed experience early on, for though it felt like I was in the wilds, the city was just beyond my green bubble, ever waiting for me.

That experience was not to last though, as I crossed into the wide expanse of Presidio Park. The location was once a military base and an important pacific fortification for the US Military, and at one time, Spain. It was established in 1776, the very same year that America declared independence from England. The fort maintained a military presence within San Francisco until 1994, ending its 219 years as a fortification. At that time, its sprawling 1,500 acres were deeded to the National Park Service, and remains in its possession to this day. (source)

As a result of its military history, it is full of parade grounds, and is not as densely packed as the rest of the city. Moving up a steep incline, I soon found myself in a well kept parkland. The noises of traffic, so prevalent not fifteen minutes before, fell away. Here people walked dogs, and jogged along, past historical markers and fitness placards, while birds sang and squirrels jostled for bits of food left upon the ground by picnickers.

Diverting past a golf course filled with Lexus, BMW and Porsche a plenty, the trail veered and the population dived as a shaded wood welcomed me. Gaining elevation, quiet surrounded me, save for the pacific wind that blew through the trees granting a cool tinge to the noon time air, all while the Golden Gate Bridge began to peek through the wooded copse.

So far, this hike had been full of surprises, and as I stood overlooking the national cemetery, with a stunning view of the Golden Gate Bridge, I could not help but feel that I had found a type of hidden treasure nestled within the city.

Following the trail, it led me out of the woods, back to sidewalk, and eventually asphalt as I navigated the old military base. Winding ever north, the spires of the Golden Gate became more and more dominant as I moved deeper into the old military base, finally passing a large parade ground set before four identical barracks in a spanish architectural style. It was a curious mash up of architectural beauty and picture perfect reproduction that made them seem both original and mass produced at the same time providing a jarring effect as I followed signs for the coastal trail.

Arriving at Golden Gate plaza, I stopped for lunch and  looked towards the bridge, considering my options. Tourists dominated the area, crowding almost every free space, as they milled about from shops, to path, to photo opportunity. Rented bikes whizzed by, with hardly a care for any pedestrians around them, who seemed equally oblivious as they wandered about.

What struck me as interesting was the number of languages I heard, Chinese, Korean, Dutch, English, and others I could not readily identify. While it was a chaotic morass, this area was still a global meeting of various cultures all gathered together to experience a particular American landmark that always ends up destroyed in any blockbuster action movies.

Considering it now, I suppose in that moment I had become a tourist too, because I was about to undertake the same journey, adding a little over three miles to my hike, and walk the bridge.

This sounds like a romantic notion. As stated, the Golden Gate is famous, bringing in visitors from around the world to see its iconic red spires. It is the symbol of San Francisco, dominating logos, souvenirs, paintings and films. However, the fact that it is such a venerable symbol does not take away from the fact that it is also a critical traffic artery, and a busy tourist destination.

In short, I had entered into utter chaos and noise. People pressed in around me in a manner that I would associate more with New York City than the bay area, as traffic roared by at highway speeds.  Bicyclists continually zoomed by, ringing their bells, giving you only moments to push yourself up against the side, but I wasn’t about to turn around.

As I wrote last week, perseverance pays, and I had come to hike that damn bridge.

Ushered on by winds, and a prevailing sense of mild panic being surrounded by so many people, the views only got better as I made my way across. There, over an expanse of bright blue water lay Alcatraz, and to my other side was the vastness of the Pacific Ocean. Massive container ships trailed out before my vision, ferrying their goods back and forth, as sail boats raced by distracting me from the chaos that was around me.

Some experiences, some views, make the chaos worth it.

A curious rhythm to the hike became apparent as I ventured on, past my halfway point. After another section along a busy road, I again found myself in a forest. This time, clinging to high rocky hills that overlooked the ocean. Waves rolled in as the container ships continued their endless procession in the distance, as the hike again grew more and more wild only for it to dump me suddenly, back into a neighborhood, back into the city, before dropping me off onto the beach.

Here among decaying and abandoned bunkers, and cannon emplacements, kites flew, and people luxuriated in the sun enjoying cool seventy degree temperatures, a marked, and beautiful contrast to the sweltering heat wave that was punishing much of the rest of the country at the time. Reporting earlier on the fantastic weather conditions back to our cover artist in Connecticut, they sent a simple one word reply.

Moving along the shore, past the ruins of the Sutro baths, I was once again on the sidewalk, this time happy for the experience, if for no other reason than that it was keeping sand out of my shoes. Two days after my hike, they still rattle when I put them on, as so much has worked itself between the goretex layers, I wonder if they will ever be free of the gritty material ever again.

Finally, I ended up on the edge of the Golden Gate Park, the very same area I had started. Following a path, through the beautifully kept park, I soon found myself amongst the woods again, as the light of day began fading. As a result of backtracks and diversions, the hike had stretched long, ultimately coming in at 16.2 miles.

Oftentimes, hiking is seen as a purely rural, or remote activity, however this adventure showed it can be anything but. With a bit of planning and searching, I had found a hidden gem, full of history, stunning natural scenery and ample challenge. Best of all, it was just a short bus ride away in the heart of the City by the Bay.