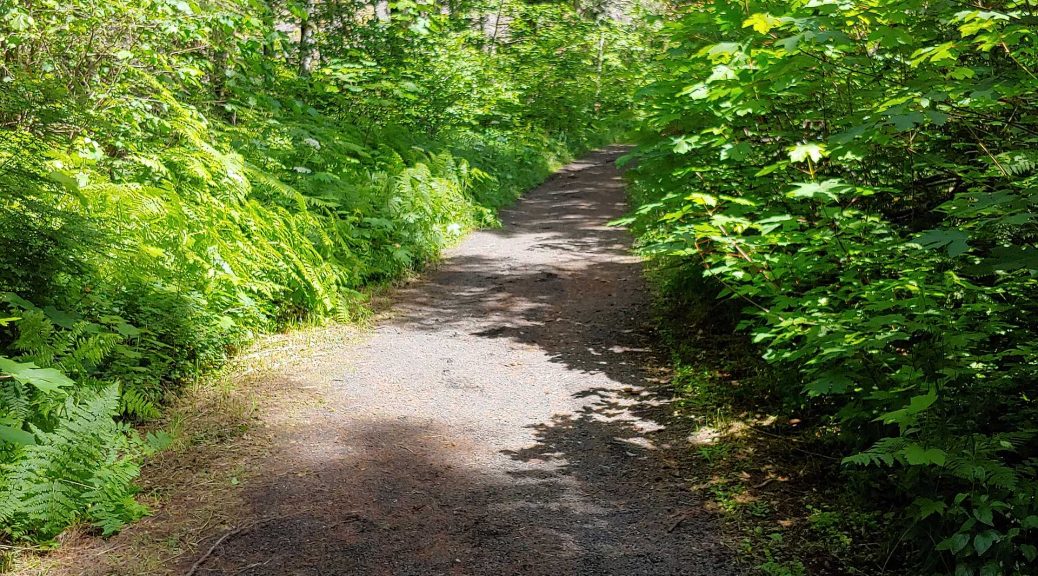 Starting the day near the crack of noon (About 11:15am) after a 1.5 hour drive through the beautiful Columbia River Gorge, I arrived at the Beacon Rock State Park, awash in old memories and new expectations.

Last year, long before the re-release of the website, I completed my first pacific north west trail in this park, the Hamilton Mountain Loop. It is a heavily trafficked and grueling uphill climb that proved worth the effort;  rewarding those that persevere with stunning views of the Columbia River Gorge.

Arriving at the Equestrian trail, memories flashed through my mind of barely being able to move for a week after my last Beacon Rock experience, but I wasn’t about to let that stop me. Hardy Ridge was advertised in my research as a low trafficked, somewhat overgrown, and moderately challenging trail.

A “moderate hike” is an interesting term, normally they are rated easy, moderate, or hard. However, these terms are not well defined thus leaving one to be surprised. When I hiked Hamilton last year, I remember it being listed as a challenging, moderate hike. This year, it is rated as a difficult hike, go figure.

You have to have faith, dear reader, until proven otherwise. This works well in life, as well as the trail at least, until it doesn’t.

Taking off from the trailhead, which had the feature of not-potable water. (though this did not stop some intrepid, thirsty souls from availing themselves to it) I took off on a nice, broad trail with the forest canopy above me shielding me from the noonday sun.

So far so good.

The trail pitched gently up for the first mile and a half or so, where I came to a decision. I could head for Hamilton Mountain (an alternative to the hike I did last year) or go left or right for the Hardy Ridge Loop.

Ultimately, I turned left. Looking at my map, it seemed there were more serious elevation gains in that direction. Getting the hard work done early, while I was still fresh seemed the logical option.

It was at this point I began to feel a surge of confidence. The trail continued to veer vaguely up. There was not a mountain biker in sight, and the only evidence I saw of horses were their tracks (along with other things I don’t care to mention) indicating their occasional presence on the trail. Overall traffic was light, with only a few other hikers milling about, and all seemed quite wonderful with the world.

To be honest I was patting myself on the back for finding such a great, moderately challenging hike, as I watched garter snakes zip off the trail to hide, and butterflies fly from flower to flower.

It all began so well, the makings of a beautiful day.

Then… about another half a mile or so down I saw a sign, “Foot Traffic Only” and just past was my trail, with a serious incline, taking me up to the hardest part of the day…

In retrospect the sign should have read… “Welcome to hell.”

For the next mile and a half to two miles it was a constant uphill climb, of zig zagging switch backs, and ever increasing steep inclines, until it got to extremes where I was basically climbing to get up ledges set into the trail.

During this time I was enveloped by a thick,cool, humid forest bursting with life.  The Columbia River below me has a type of marine layer effect that diminished by degrees as I climbed until suddenly the air began to clear and the forest opened up to reveal the full majesty of the Columbia River gorge.

The challenge is ultimately part of the experience. While it was tough physical work to scramble up those switchbacks, and pull myself up the trail ultimately the reward was stunning beauty, and a sense of accomplishment that lasted for hours as I surveyed the world stretching out to the horizons around me.

And I was still just getting started!

All of this switchbacking, climbing, scrambling craziness takes you to another junction point. You can continue up on a hike along the ridge of the gorge, or bypass it entirely to head towards the “lower loop” on your way back to the Equestrian Trailhead.

I did not come to bypass anything, in fact, I had my GPS set to track and trace so that I would not miss a mile and, while challenging, so far this hike had been completely worth it.

So… that meant, it was time to go up some more.

This is where the hike started throwing curveballs at me. At points, the width of the trail was far less than six inches wide, making it difficult to use my trekking poles. Parts of the trail here grew very rocky, and a bit treacherous causing me to slip and slide a few times.  (When you are close to a 1500-2000 foot drop, this definitely gets your attention.) All the while the forest was thinning, giving way to a grassy and viney morass that was encroaching in on the trail at every opportunity.

Finally, I reach the stony ridge and am trekking upon it, with vistas that stretch for miles. The wind is blowing cool fresh air up from the Columbia, and I am reminded again why I do this, why I come out to hike, as I pass some of my fellows from the morning who have stopped at this edge or that to take selfies, eat lunch or both.

This was one of the highlights of my day, finally reaching the end of the trail spur with no option but to turn back or to take up base jumping.

Having left my parachute at home… I decided to stop for lunch, the flies began to buzz about my head, until I felt like I was reenacting a scene from the Ten Commandments. Still, nothing could destroy my joy at what I had accomplished thus far. Hardy Ridge, while a real beast in places, had been a very enjoyable hike, and I was only half way done!

It was all (mostly) downhill from here. (In a good way.)

Now some people despise going downhill far more than they hate going uphill. I am of a different philosophy. Downhill for me is the long slow cooldown of a hike. My speed generally increases, and I find I have more time to enjoy the scenery because I’m less worried about my heart beating out of my chest and filing for separation.

Retracing my steps, coming back to where I was earlier before taking the ridge hike, the same pattern of switchbacks, rockiness, and patches of deep forest awaited me on the lower Hardy Ridge, but, as said, going down makes this MUCH easier for me.

Navigating it deftly, the day kind of melted into the plodding rhythm of my steps, and an overall enjoyment of the scenery around me until I finally broke out, back on to the equestrian portion of the trail.

From here there was little more to do but proceed back to the trail head, and play some Mahjong on my phone until my long suffering husband arrived to take me home.

Next up…. Black hole falls!